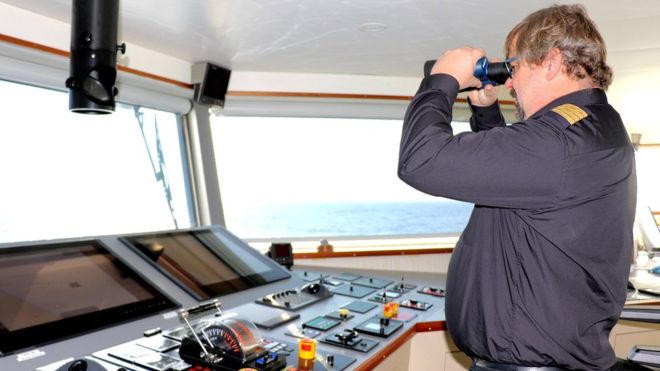 “Have a pleasant journey,” blurts the tannoy, as the engines ramp up and we pull away from the harbour in Fynshav, southern Denmark.

I’m aboard Ellen, an electric-powered ferry, sailing to the island of Ærø, in the west Baltic Sea.

On the ship’s bridge, Captain Thomas Larsen stands behind a panel with controls and electronic charts. “What I can see on these two screens is a power management system,” he points out. “It shows me all my batteries. And how far I can expect to go.”

“The main difference is that I don’t have a full fuel tank. I need to think a lot about how I’m using my power.”

As we talk an alarm starts beeping. “Oh this tells me I do not have power for a new return trip without recharging,” Captain Larsen says calmly.

Powered entirely by batteries, Ellen is something of a Tesla among ferries. Fully charged, the 60m vessel can sail 22 nautical miles with up to 200 passengers and 30 cars onboard. 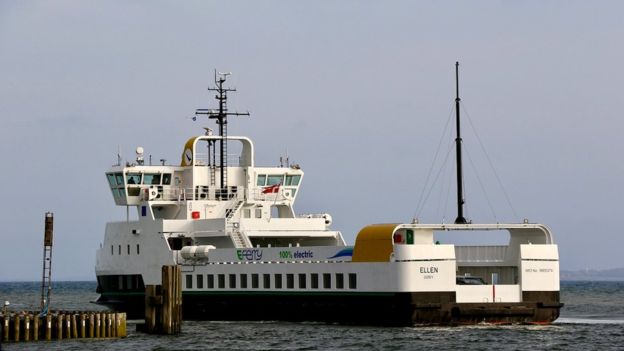 Ellen has a range of 22 nautical miles. Photo: Adrienne Murray

Ellen replaces an older diesel-powered vessel, and in the onboard cafe passengers welcome the change.

“It doesn’t make so much noise. And no smoke from the diesel – it’s good,” one traveller tells me.

“It’s very quiet. You don’t feel anything. It’s a great idea also for the environment,” says another.

“Ferry shipping in general is very dirty business,” says Halfdan Abrahamsen, an information officer from Ærø EnergyLab, as he shows me around.

Ships usually use marine diesel or heavy fuel oil, “which is just about the bottom of the food chain when it comes to product from refineries,” says Mr Abrahamsen.

The only oil onboard Ellen is for the gearbox and in the kitchen for making French fries, he says.

The emission-free ferry is expected to reduce CO2 emissions by 2,000 tonnes a year. It’s part of an EU-backed project to develop green ferries for longer routes.

Beyond a set of heavy metal doors, lies the engine and two battery rooms, where 840 lithium-ion batteries supplied by Swiss firm Leclanché, are stacked from floor to ceiling. 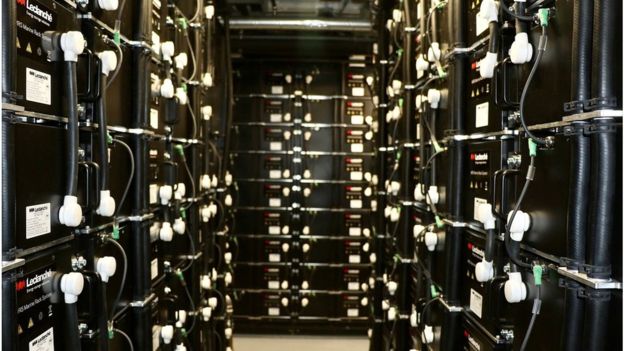 Totalling 4.3MWh this is the largest battery capacity at sea and equivalent to the average amount of electricity a UK household consumes each year.

“It is the biggest electric ferry and the longest distance operating ferry in the world at the moment,” says Kimmo Rauma, vice-president of Danfoss Editron, the Finland-based company behind the electrical propulsion and charging technology.

After a 70 minute voyage, Ellen arrives at the harbour in Søby and moors alongside the charging station.

A mechanical arm plugs in and recharges the batteries in less than 25 minutes with clean energy supplied by local wind turbines.

Ellen is not fully operational just yet, and it hasn’t all been smooth sailing. Building a boat with so many batteries is complex and since being launched some battery cells have been replaced. 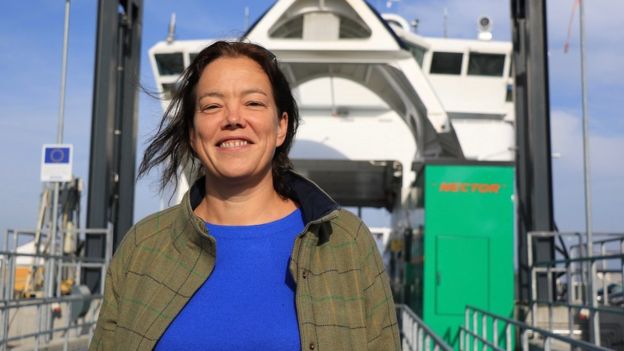 “They’re getting lighter and more energy dense, but they’re still heavy,” Trine Heinemann, the E-Ferry project coordinator explains, as we stand on the dockside.

“We are paying maybe 25% of what you would pay for running a similar diesel vessel.” says Ms Heinemann. “So that’s the significant saving.”

Maintenance costs are much lower too. A diesel engine has about 30,000 moving parts, in an electric motor it’s just the bearings that need maintenance, Dr Rauma says. 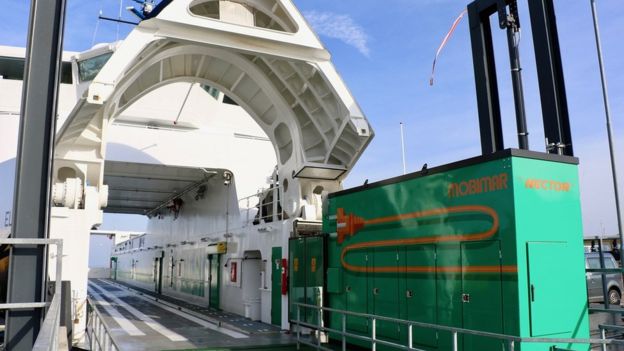 “Then you still have the transformer and the electrical infrastructure. So in terms of establishing an electrical vessel, we are looking at a significantly higher cost.”

So while battery power is certainly greener, is it commercially viable? The team believes so.

“Some say within 14 months you break even and then it’s saving from then on. We’re being a little bit more conservative and saying maybe four or five years,” says Ms Heinemann.

At Søby Shipyard, where Ellen was built, chief executive Roar Falkenberg thinks costs will come down.

“Ellen was a prototype. I think when we build the next Ellen, it will be only cost a bit more than a normal ferry. And if you look three to five years ahead, I think the price will be the same.” 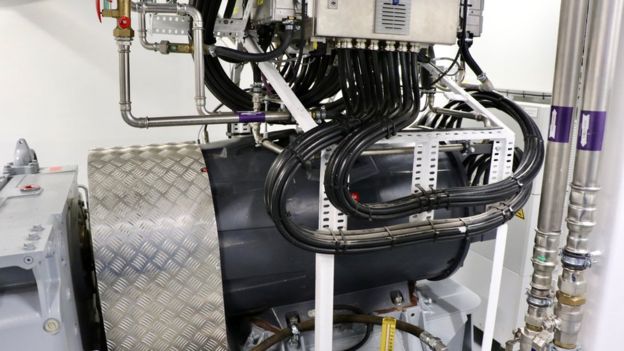 “If you have strong air quality regulation then you aren’t able to burn the worst quality marine fuels,” he says, “which then makes the battery more competitive, because it’s now competing against the more expensive fossil fuel.”

The shipping industry is responsible for around 3% of global CO2 and greenhouse gas emissions. In April 2018, the International Maritime Organisation set new targets to reduce these emissions by “at least 50% by 2050 compared to 2008” levels. 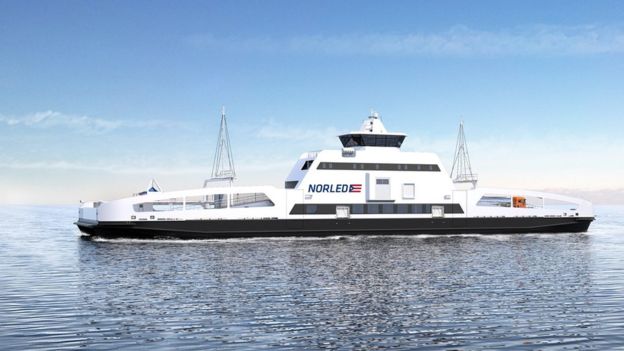 Norled is part of a hydrogen-powered ferry project. Photo: Norled

Nordic countries have led a shift towards hybrid and electric power. The first fully-electric car ferry was launched in Norway a few years ago, and the operator Norled is now developing, what it claims will be the world’s first hydrogen-fuelled ferry.

“The technology is ready,” says Danfoss Editron’s Kimmo Rauma. “The question is that the maritime industry is not the fastest to change.”

However experts say that scaling up battery power for large ships has significant limitations.

“The common denominator for successful battery use is that the vessels operate close to shore,” says Maria Skipper Schwenn, a director at industry body, Danish Shipping.

“The operational reach is limited simply due to the capacity of the battery itself. It’s simply not possible today when you are sailing more than 10 or 20 days at sea. In addition to that you need an enormous charging capacity in the port.”

“With the technology we have right now… it doesn’t seem like a viable solution for the deep-sea shipping. But for ferries, supply ships and tugboats, it’s an excellent solution.”

Back at Søby Shipyard, Roar Falkenberg agrees. “The key is how much energy can you store in the battery. If you have to sail from England to the United States, you need a lot! And then you can’t have any cargo, you can only have batteries. Maybe in 10 years, 15 years, there will be other ways for longer ship routes.”


News
All News Posts
Did you know that…